Many leading contesters claim the WAEDC to be the most challenging contest of the year.

Being a true blue DX contest, only intercontinental QSOs between DX and Europe are counted (exception is the RTTY part). Therefore the number of DX QSOs here may be similar to the amount of DX usually worked in the CQWW. 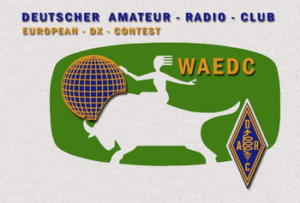 Moreover, the unique feature of QTC-traffic adds much fun and another operating challenge to the contest. Here the DX stations transfer real telegrams to the European stations. These telegrams contain data of previously logged QSOs. Each of these records counts one additional point for the sender and the receiver, given that the complete record was logged correctly. Thus, a DX station can actually double its score by sending QTCs. Some European stations, and not only the leading ranks, gain more than 70 percent of their score from QTC traffic.

Hovever, like in any other contest you have to take care about the number of multipliers too. From a DX point of view these are the WAE entities. For the European stations multipliers come from DXCC entities worked and the numerical call areas of several big countries (JA, PY, W, VE, VK, ZL, ZS). Because multipliers are counted per band and on the low bands they count more than on the high bands, there ist significant activity also on 40m and 80m. And remember – every contact is a DX QSO! Reflecting on this, you will work lowband DX as well as highband DX even in the CW part in August as well as in the SSB part in September, despite all seasonal problems in the northern hemisphere. Remember, this part of the year is usually good for lowband activities from the southern hemisphere. For a well equipped station and a dedicated operator worldwide DX is possible on 80m. In addition, the nowadays poor 10m band surprisingly often shows short DX openings with good rates and useful multipliers.

From our point of view, the WAEDCs are significant landmarks in the yearly contest calender, providing highest level radiosport for serious contesters and fun for part time entrants and DXers alike. Join the WAEDC!

See you in the contest next weekend … I will be there as H2X to give you pont an QTCs !