H44 – Solomon Islands is a sovereign state consisting of six major islands and over 900 smaller islands in Oceania lying to the east of Papua New Guinea and northwest of Vanuatu and covering a land area of 28,400 square kilometres (11,000 sq mi).

The country’s capital, Honiara, is located on the island of Guadalcanal. The country takes its name from the Solomon Islands archipelago, which is a collection of Melanesian islands that also includes the North Solomon Islands (part of Papua New Guinea), but excludes outlying islands, such as Rennell and Bellona, and the Santa Cruz Islands (H40).

H40 – Temotu is the easternmost province of Solomon Islands. The province was formerly known as Santa Cruz Islands Province.

It consists, essentially, of two chains of islands which run parallel to each other from the northwest to the southeast. Its area is 895 square kilometres.

(*) 60m where and if included in license 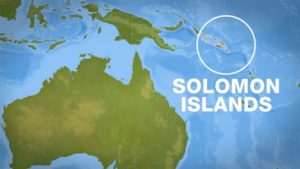