The year of 2020 is an important year for the Republic of Cyprus which completes 60 years since its establishment.

A request to the licensing authority has been made requesting that members of CARS are granted the special prefix 5B60 for use throughout 2020, to help spread word of this important event by informing several thousand radio amateurs worldwide.

CARS is pleased to announce that the use of the 5B60 prefix has been approved.

The approval is valid only for CARS members with a valid radio amateur license issued by the Republic of Cyprus.

The Treaty of Guarantee is a treaty between the Republic of Cyprus, Greece, Turkey and the United Kingdom of Great Britain and Northern Ireland promulgated in 1960. Article I bans Cyprus from participating in any political union or economic union with any other state. Article II requires the other parties to guarantee the independence, territorial integrity and security of Cyprus. Article IV reserves the right of the guarantor powers to take action to re-establish the current state of affairs in Cyprus, a provision which was used as justification for the Turkish invasion of 1974. The treaty also allowed the UK to retain sovereignty over two military bases.

The treaty was used as justification for the Turkish invasion of Cyprus, in particular article IV of the treaty. This article entitled these three guarantor powers to multilateral action among them or, as a last resort if no concerted action seemed possible, each guarantor is entitled to unilateral action. These actions should be confined to restoring its status according to this Treaty as a democratic, bicommunal, single, sovereign independent state.

Article IV In the event of a breach of the provisions of the present Treaty, Greece, Turkey and the United Kingdom undertake to consult together with respect to the representations or measures necessary to ensure observance of those provisions.

In so far as common or concerted action may not prove possible, each of the three guaranteeing Powers reserves the right to take action with the sole aim of re-establishing the state of affairs created by the present Treaty. — Article IV

Initially, a bi-communal independent state was at stake due to the July 1974 coup while several Turkish Cypriot enclaves were attacked at the onset of the coup. Given these circumstances, Turkey claimed the right to unilateral action as provided by this treaty by first invading and creating a bridgehead and corridor between Kyrenia and Nicosia enclave.

The treaty was concluded the same year that the Constitution of Cyprus was finalised, and the Zürich and London Agreement and the Treaty of Alliance between the Republic of Cyprus, Greece and Turkey were written.

The OQRS is active from the beginnig through Clublog, processed the OQRS you will receive within 24h the credits to the QSOs made up to that point with 5B60ALX on LOTW.

QSL cards will be processed from December 2020.

Due to the high number of QSOs made, confirmations will be sent by paper QSL via buerau only for QSOs in CW, SSB and RTTY and only via Bueru.
The OQRS service remains valid with a limited number of QSL cards available.

However, all QSOs were credited to LOTW. 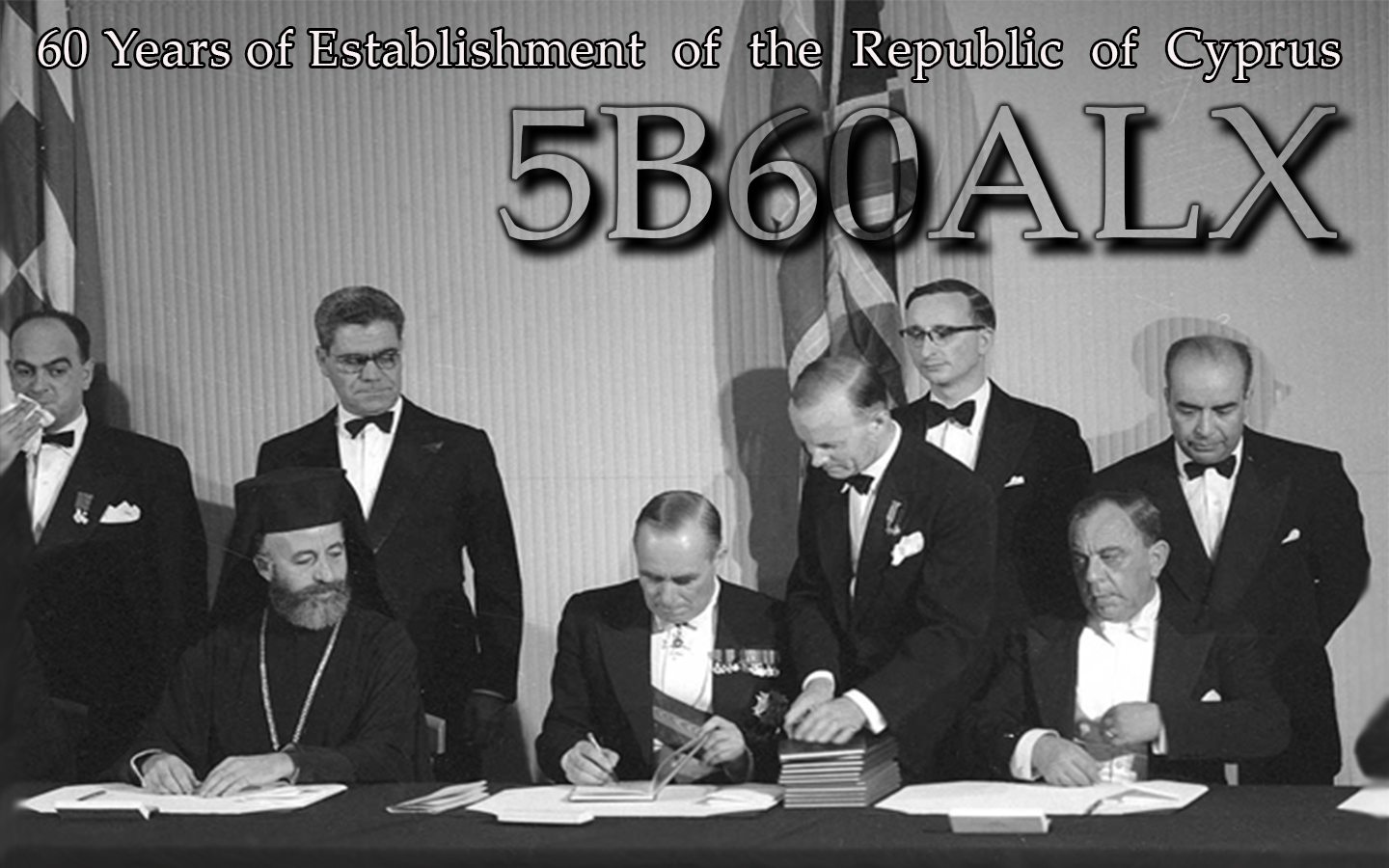 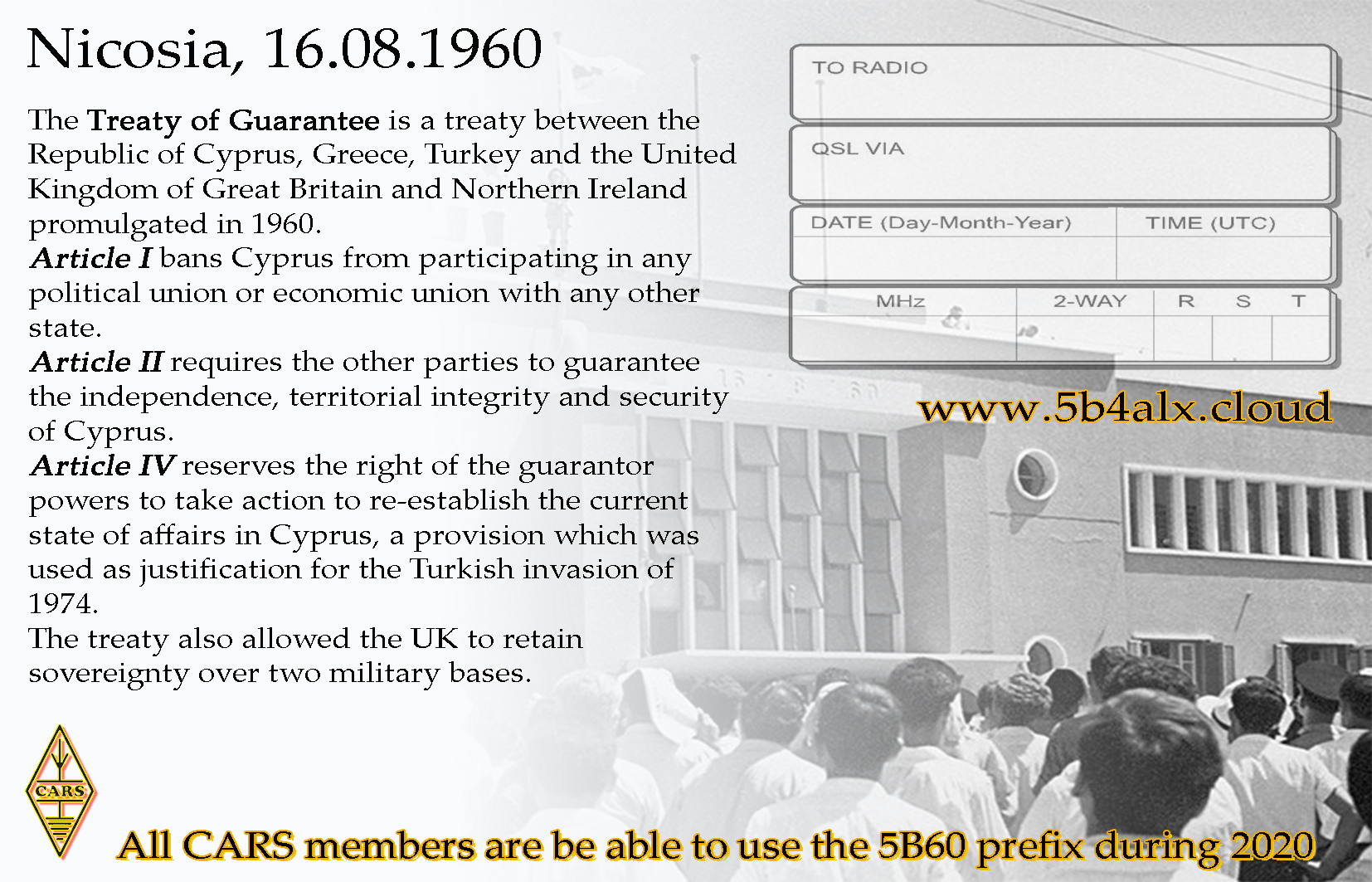