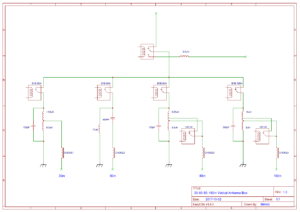 The two chokes for 30m and 80m is ready and below there are two measurements made with the VNA with about 30dB of loss in 30m and 23dB of loss in 80m :

Let’s start with the build processing of the tuning box !!!

RF separators to create the four “rooms” where the four L-C systems will be accommodated.

Today Nov,13 I worked on the “30m tuning room”, two coils and capacitors are fixed.

I preferred to hold the center part of the two coils, which is also the point of feed from the coax, and have the possibility to move on the heads of the coils trought two threaded locking columns.
The connections of the moving parts were made by silver shield, which allows to move (compress or enlarge) the resonant coil and the tuning coil for a fine tuning when the antenna will be installed.

I also left the place for two more capacitors if it needed to increase the capacity to ground.

I missed the two chokes for 60m and 160m, I was waiting for the two FT240-X and the teflon cable.
Today I started doing one of the two chokes that will be the same in construction and features, tomorrow I will read instrument isolation of the two choke on the two bands.

Today Nov,14 I worked on the “80m tuning room”, two coils and capacitors are fixed.

The “80m tuning room” is formed by a resonant coil that has given me some positioning problem because it is too big to be airborne and self-supported made.

Anyway all is fixed !

Even in 80m I made it in order to add at least another capacitor and placed a further B1B vacuum relay to short circuit two coils of the resonant coil to have at least two band resonances (CW and DIGI).